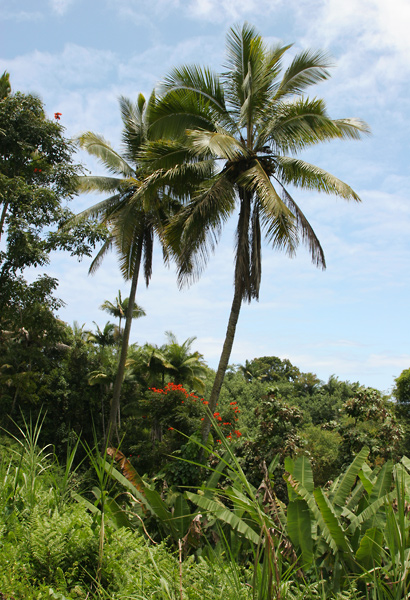 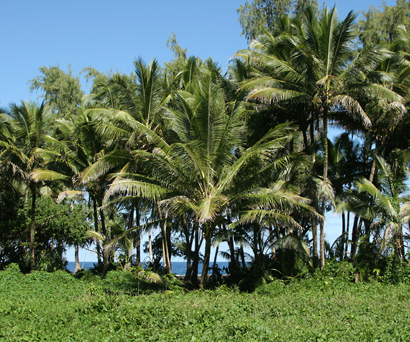 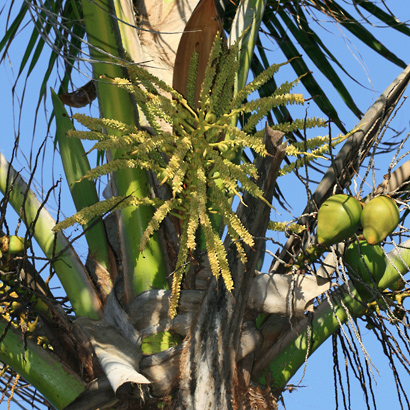 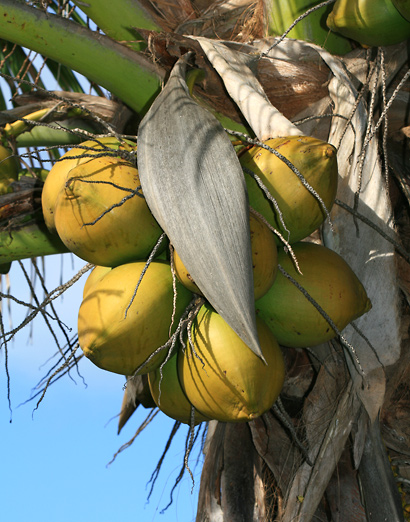 Description: The tiny, yellowish or greenish flowers are in inflorescences that emerge from the leaf axils. Each inflorescence is enveloped by a large, lanceolate spathe. The smaller male flowers are at the tip of the inflorescence, while the larger female flowers are at the base. The female flowers are followed by large, up to 1 foot (30 cm) or more long, single seeded fruits (drupes) known as coconuts. The coconuts have a thick, fibrous husk surrounding a hard, brown, woody shell that contains milky water and a lining of white meat. The leaves are in a tuft at the top of the plant and are pinnate with green, linear-lanceolate leaflets. The old leaves are shed and don't form a skirt at the base of the leaves. The single trunks have a thickened base and are gray-brown, ringed with scars from fallen leaf bases, unbranched, and often gracefully curved. These long-lived palms can live for up to a century.

Here in Hawaii, Coconut Palms grow in coastal areas, often close to the ocean's edge since these palms are salt tolerant and the buoyant fruits can be dispersed by ocean current. This is by far the most common palm species in Hawaii.

Beware of walking under a Coconut Palm with large, yellow or bronze coconuts because falling coconuts can cause serious head injuries.

Canoe Plant – Coconut Palms were brought here to Hawaii by the ancient Polynesians in their canoes. This is one of the World's most useful plants since almost every part of the Coconut Palm can serve some useful purpose. Hawaiians used the coconuts for food and as an emergency source of drinking water. Oil from the meat was used as a cosmetic on the skin and hair. Coconut shells were used for spoons, cups, bowls, and other containers. The fibrous husks were made into cordage and used to make nets and lashing. The leaves were used for roofing thatch and plaited to make baskets, fans, and other goods. The leaf midribs were used to skewer Kukui nuts to make candles. The trunks were used for house construction and used to make wooden items like drums and canoes. Various parts of the plant were also used for medicinal purposes.

Edible – The white, oily, delicious coconut meat is edible either raw or cooked. Coconuts are ripe for eating when they turn yellow or bronze and fall to the ground. Fallen wood-brown and gray coconuts are too old for eating. Drinkable coconut water is obtained from the large, green coconuts. The dried coconut meat is known as copra, and it is crushed and pressed to obtain coconut oil, and the remaining residue is used in animal feed. Coconut meat, coconut oil, and coconut milk (a mix of coconut water and coconut meat) are used in numerous commercial food products, and they are especially popular in tropical desserts. Coconut oil is also used in many cosmetics, especially soaps and moisturizers. The growing tip of the palm, located at the base of the leaves, can be harvested (killing the plant) to produce the expensive vegetable delicacy known as "heart of palm". Sugary sap from the inflorescences can be used to make an alcoholic beverage.

Fragrant – The flowers are fragrant, but they are found high in the tree. Oil from the fruit has a delightful coconut scent.

More About This Plant